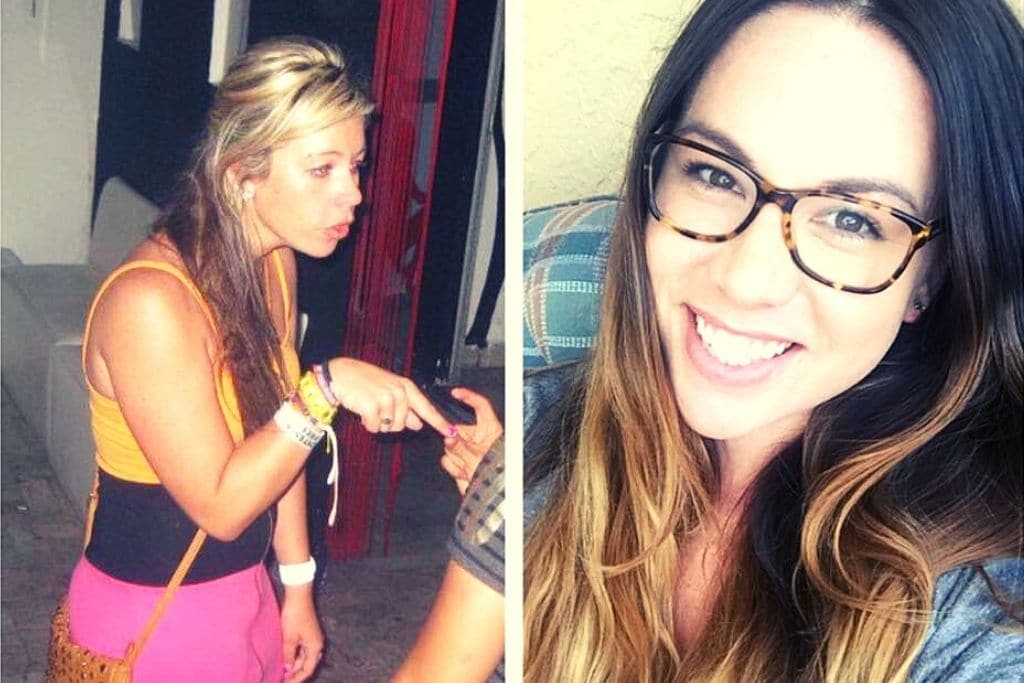 Kelly: At the beginning of my last year of drinking I was at my worst. I was not sleeping for days on end, missing work, drinking and using cocaine almost every day. Towards the end of my last year drinking, I wasn’t drinking every day and I was in a committed relationship, but I was still miserable. I was trying really hard to regulate my drinking by only drinking on certain days, only drinking certain types of beer or liquor, and any other silly game you can think of. I tried them all and it didn’t work.

Kelly: A trip I took to the Dominican Republic, with some girlfriends of mine, was the last straw. We went for one of their bachelorette parties to an all-inclusive resort. My then-boyfriend did not want me to go because he was well aware of my drinking habits and didn’t trust that I could stay safe and not get out of control. I ‘behaved’ the first day there, but by the second day I was blacked out and throwing up. My friends had to take care of me and my boyfriend broke up with me via text because I did what I said I wouldn’t do. I was full of shame, guilt, and embarrassment. I was extremely hungover and in tears in the airport flying back home. I spoke with my mom and I had a moment of clarity that something needed to change.

Mrs D: That's great you could talk to your mum honestly. How was it for after you stopped?

Kelly: Really, really, hard. I was miserable. I was lost, confused, and hurting deeply emotionally. I didn’t know what I was doing with my life, where I was going or how to get there. I didn’t know how to be sober or how to ask for help. I didn’t know if I could live life without alcohol and drugs. I was also living in a foreign country at this time (Mexico) and trying to work out things with my then-boyfriend (now husband) which made not drinking even harder.

Kelly: They were happy and overall very supportive. My family had watched me put myself in danger for a long time and they were glad to know that was over. My friends also offered me a ton of encouragement and love and I am so grateful for that.

Kelly: No, not as of today.

Mrs D: How long after you quit did it take for things to start to calm down for you emotionally & physically?

Kelly: Physically I was bloated, exhausted and felt like crap for a few weeks. Then slowly I began feeling better every day and I would say by 90 days I started feeling like a new woman. Emotionally it was a bit different. I had to work through a lot of things, my relationship, trauma, why I drank, why I needed to stop, if I could stop and how etc. After I hit a year of sobriety I felt much more emotionally stable.

Mrs D: People often find there's some hidden shit they need to deal with after they take the drink away. What about going out and socialising.. how did you find it socialising sober?

Kelly: At first I felt awkward and I lied about why I wasn’t drinking. I wasn’t sure I wanted anyone to know I was “sober” and I myself wasn’t sure how long I was going to be sober. After about 6 to 8 months I started identifying as a non-drinker. I started going out less. I didn’t have to be at every event or party. Eventually my “fear of missing out” faded away. It was weird at first explaining to everyone why I don’t drink, but now it’s just normal.

Mrs D: It's crazy to imagine a time when it becomes normal but it so does! Was there anything surprising that you learned about yourself when you stopped drinking?

Kelly: So many things! I learned that I am not as extroverted as I thought. I learned that there were hobbies I was doing and things I was participating in that I didn’t really want to be doing. I learned I had been drinking and using other drugs destructively for years and that I had always done that since I first picked up. I learned I am a highly sensitive person. I believe sobriety is a journey of self-discovery and I am learning new things every day.

Kelly: My life changed in every way possible. I finally have the desire to live, not only exist. I feel a sense of freedom I have never known. I have the first and longest successful romantic relationship of my life – and we are now married! I have restored friendships and walked away from others. I have learned how to show up and be there for my friends and family during their hardest and most trying times. I have a full-time job doing what I love, writing about recovery. My story has been published in books and I’m writing my own. I own a home and I am able to pay my bills. Life is wonderful.

Mrs D: That's all so fantastic! Can you pinpoint other highlights from getting sober?

Kelly: No more hangovers, no more blackouts and no more putting myself in dangerous situations, no more losing things like my phone, purse, and wallet. I no longer wallow in a pit of self-loathing and want to numb out of the present. I am content just to be alive and wake up sober every day. I am no longer on an endless search for “more.” I am able to love myself and others.

Kelly: Yes! I would definitely research treatment centers and probably go to professional treatment, or go to a 12 step program right away. I was too stubborn to do those things when I got sober. I was scared and embarrassed and the first year was pretty lonely and hard because of that.

Kelly: Don’t be afraid to try sobriety, it might be the best thing that ever happens to you. Also, don’t be afraid to ask for help like I was. Treatment is available and it works! As time goes on you will become a new person and recovery will become part of your identity.

Kelly: You can read more of my writing on my blog The Adventures of a Sober Señorita.