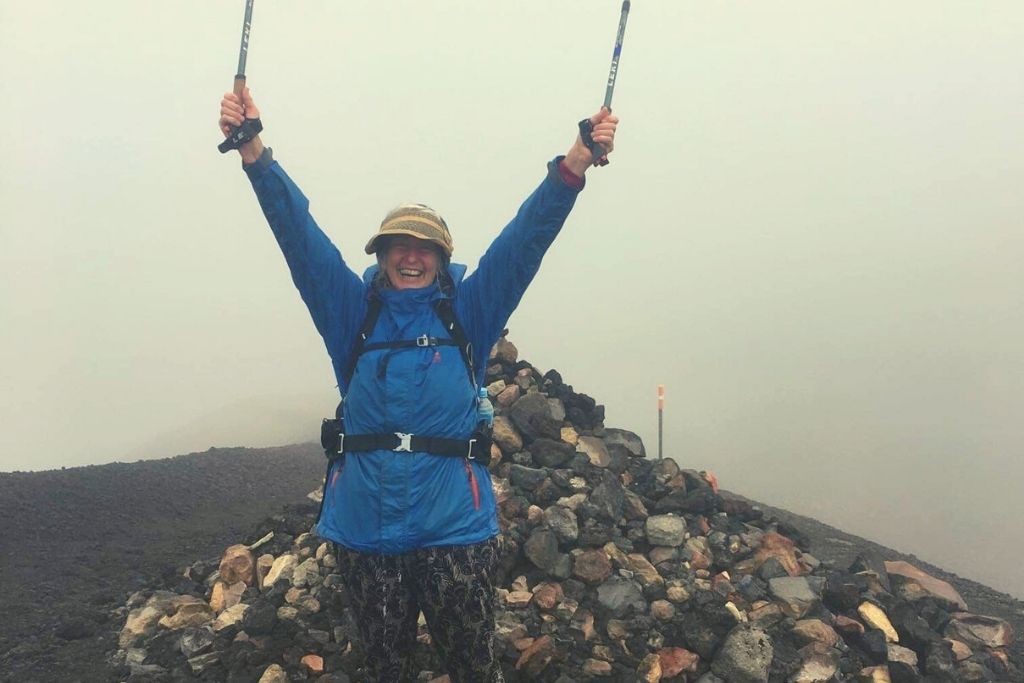 This week's Sober Story comes from Rosie, a 68-year-old living in the Coromadel.

Mrs D: When did you start drinking?

Rosie: My journey with alcohol began when I was 14 one Christmas Eve.  My parents had gone out and my eldest brothers decided I needed to ‘learn how to control booze so men couldn’t take advantage of me’ giving me several glasses of home brew. I remember feeling dizzy and giggly - and I liked it. Alcohol was always easily available and within a few months I was experimenting more and more with stronger drinks, and had my first blackout when I was 15. Fortunately my brothers were at the party and carried me home, but I can still remember vomiting every 20 minutes the next day and feeling like I was poisoned (which of course I was)

Mrs D: Did you ever get in any dangerous situations?

Rosie: When I was 16 a girlfriend and I had a few gins at a party before our school graduation ceremony, but on the way to the prize giving she lost control of the van she was driving and it rolled over and over. We survived, but I spent most of the next year in hospital having major surgery, skin grafts and physiotherapy learning how to walk again on a very damaged leg. My mum used to sneak sherry into the hospital to ‘help me sleep’ and I used to long for her to bring me my evening tipple, washed down with the sleeping pills I was prescribed to release the boredom of weeks of bed rest in a hospital ward. It didn’t click that alcohol was the major contributing factor to how I got hurt in the first place.

Rosie: By the time I turned 17 I was basically hooked on drinking anything I could get my hands on, I left home to go to University and joined the faculty of serious party animals! Half way through my year at uni a friend offered me some LSD - I tried it, liked it, and promptly entered the other world of smoking dope, dropping speed and pretty much obliterating myself at every opportunity. I dropped out of university and got a job proof reading at a newspaper, a night shift shared with other regular alcohol and other drug users. It was the perfect environment for addiction.

Mrs D: How were you doing generally at that time?

Rosie: Even when I was sober my emotional state was pretty unstable. I had fallen in love, fallen out of love, been sexually hit on frequently by lots of men but I had really low self esteem and thought I was unworthy of being loved. It was the 70’s - the age of sex drugs and rock n roll and I was trying it all - at some point I found I couldn’t stop crying and a friend took me to see her doctor. He said I was suffering a nervous breakdown and prescribed me Valium and Mogadon to calm me down and get some sleep. I found they were wonderful mixed with the rest of the substances I was taking at the time - cigarettes, coffee, alcohol and diet pills (which were basically amphetamine) Looking back I’m amazed I actually survived those years!

Mrs D: Did you ever try to stop all the drinking and drugging?

Rosie: At some hazy point coming down off an acid trip I decided to get straight and flushed all the pills down the loo, hitched a ride into the country and cleaned up. I got a job in an orchard pruning trees and slowly calmed down until my restlessness grabbed me and I got ready to head off on a big overseas adventure. I had started doing yoga, become a vegetarian and stopped using alcohol completely, but marijuana was easy to get and kept me pretty out of it until I got on a plane for America. I met up with an old friend and promptly relapsed for a six week binge, then arrived in London to join up with one of my brothers and some friends. One of them knew about this Indian Guru who was the flavour of the moment - I went to a meeting and within a couple of weeks was hooked on a new life of meditation, celibacy, vegetarianism and no drugs or alcohol.  It worked for several months, but then someone turned up with some hash and all my reasoning disappeared into another haze. After a few months of craziness and travelling back to the USA I eventually got a flight back home to NZ, found out I was pregnant and got sober again very quickly!

Mrs D: Did that bring about some change in your lifestyle?

Rosie: The next seven years were happy ones - I got married, had 3 children and was living in Auckland with my musician husband, in our own home, staying off the booze and drugs and living a simple spiritual life. Then the culture changed, wine with dinner, regular parties with other young parents, and I went into the entertainment industry and had a regular gig singing in a covers band. By day I was earth mother, at night I was a rock chic - and along with that came the same heady mix of alcohol and other drugs. Within 3 years my addiction had taken over again and I made several really bad choices, left my marriage and ran away with a seemingly charming man who turned out to be a really nasty con artist who basically took me to the cleaners, abused me and my children and left me homeless and in debt. By the time I was 32 I was divorced, emotionally broken, financially ruined and using alcohol to numb the deepening terror and shame.

Rosie: The next 8 years were a continuing cycle of drinking, bad relationships, moving houses (and schools for my children) and feeling less and less worthy. I got a job cleaning night clubs and once again there was a ready supply of alcohol. It was messy. I had 3 beautiful teenage kids who needed a good role model - which I wasn’t - was trying to complete a diploma in craft design, pay the bills and cope with the emotional carnage I was hiding inside. I would drink cheap wine at home when I could get it, reading the labels in the bottle store to get the highest alcohol percentage rather than quality... and when I got to go out for a few drinks with friends I would wake up the next day with no idea of what had taken place the night before - how I had got home or who with. My shame deepened and I wasn’t be able to meet my own eyes in the mirror let alone anyone else’s.

Mrs D: I felt a similar way at my lowest point.

Rosie: At some point a really good friend rang me up and suggested I go to Alcoholics Anonymous, pointing out that I was a complete mess every time I picked up a drink. I was furious with her, as she was my drinking buddie - but something inside resonated and I looked for a local meeting. I was terrified to go in, but felt welcomed and surprised by the people there and could definitely relate to the stories I heard.  But I decided I wasn’t quite ready for AA and carried on drinking. It took me a year to get back to meetings, I would swear off booze, last a few weeks then have another binge and blackout - which would just increase the shame and guilt prompting me to use even more to try and block out the memories  of what had happened.

Mrs D: So what happened that finally led you to quit for good?

Rosie: Eventually I simply couldn’t cope with my life as it was anymore.  My 40th birthday was approaching, a big party had been planned - and I hit the wall. My eldest daughter had just left to go and live in London, my other two kids had started boarding school and I was suddenly at home by myself, alone with my terror and shame trying to quit alcohol and other drugs. Someone mentioned rehab, I went for an interview and was told I could do a 2 month residential program starting almost immediately. I was terrified, ashamed and desperate, but determined to give it a go. That was 28 years ago. I still remember the day I went in vividly - and I have not had a drink or a drug since then!

Mrs D: How was it for you at first?

Rosie: I wont say the first days, weeks, months and eventually years were easy - it took a lot of work and big changes to stay stopped. But I stayed sober - one day at a time - and I still attend 12 step meetings regularly to both keep myself accountable and to share what I have learned with others trying to get well. Staying in the company of other recovering addicts is the key to sobriety, as the support and understanding is not just essential, it is also heart warming. I love my recovery friends deeply, and have been able to share my darkest secrets and fears with them - and wonderful humour!

Mrs D: How is your life now that you are sober?

Rosie: I wouldn’t change it for anything. I have a freedom beyond anything I could imagine, and I simply love having a clear head and open heart. I have experienced huge challenges over the years that could have been excuses for picking up a drink or drug, but have resisted the cravings and worked through the difficult times. I was able to care for my parents and hold them for their last breaths, I am now a proud and reliable grandmother and was invited by my daughters to be at the births of my grandchildren - which is total proof of the healing power of recovery, as I was an embarrassment to my teenage daughters when I was using.

Mrs D: How do you view alcohol now?

Rosie: We live in a society that uses alcohol for every occasion - to celebrate, commiserate, or just socialise. There is virtually no situation where alcohol is not present - it is a powerful drug, legally available with very few restrictions, and advertised and promoted relentlessly as the answer to every occasion. It is really hard to become a true rebel and walk away from it - but honestly, it is the best thing I ever did for myself and my family.

Mrs D: Any advice for those who might be contemplating changing their own relationship with booze?

Rosie: Please, if you are reading this story and struggling with your own issues around dependency or even problem drinking, then understand that every single thing in the world is still available to you without needing to use a mind altering substance - but the chances are that you could lose everything - including your life, (or someone else’s) if you keep on using. Right now the world has been turned upside down with Covid, climate change and economic chaos. Having a clear head is such a gift, and the emotional and physical carnage of addiction could be the tipping point for so many people.

Rosie: I consider my recovery as a miraculous process that turned my life around in the most magical way, and I love being alive. I wish you all the very best with your journeys, and hope that by sharing my story you might resonate with something that could help you find peace with yours.