Home Not caring what other people think

Not caring what other people think 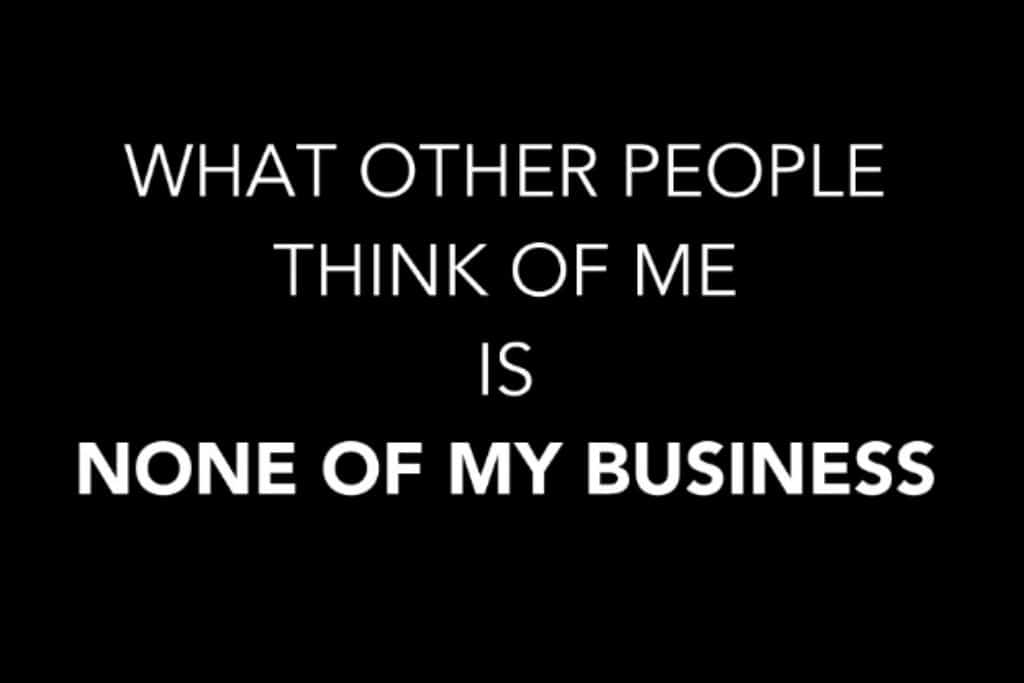 One of my biggest fears when I stopped drinking was how other people would take the new sober me. Would they judge me harshly and think of me as boring? Would they not want me around because I’d morphed into a Goody Two Shoes? Would they pity me and think of me as a down-and-out loser? Would they act supportive but not genuinely feel that way? Or worst of all - would they actively discourage me from getting sober because they didn’t want to lose their drinking buddy?

Worrying about other people’s reactions was one of the hardest things to deal with when I got sober, and that’s saying something given how many other tough things I had going on at the time. Here I was trying desperately to re-frame my identity as a non-drinker, deal with my emotions in the raw and change my hard-wired thinking about alcohol, while also worrying constantly about what other people were thinking. What a minefield.

The truth is I knew how some people would judge sober me because I used to judge non-drinkers harshly myself. When I was a boozer I found non-drinkers very puzzling. I probably wouldn’t go out of my way to make friends with anyone if I knew they didn’t share my predilection for wine guzzling. I certainly wouldn’t seek them out at a party.

So when I got sober I had to fight to turn around my own former prejudices while also preparing myself to fight potential prejudices in the minds of others. All the while working on beating cravings and carving out a new sober life and identity for myself.

In the end I decided that the best thing to do was to not worry about what other people were thinking. Despite knowing from my own experience that they may think of me as boring or lame, I decided that it just didn't matter and tried to remain very focused on myself, my own mind, and the truth as only I knew it.

Because I was the only one who knew the truth. I knew without a shadow of a doubt that I had a major problem with alcohol and things had to change. I also knew that my drinking didn’t look from the outside like the major problem it was.

No-one else knew the truth. But I knew the truth. And I had to stay very focussed on that truth if I was to change things for the better. So I did that. I stayed focussed on my truth. To do otherwise might have led me back down into a boozy hell-hole and I was not going to let that happen.

Stay focussed on your truth.

You know the truth about your drinking and the impact it is having on your life. What other people think simply doesn’t matter. It can’t matter. This is your life and you are saving it. Stay focussed on your truth and stop drinking regardless of the reactions of the people around you. This focus on the truth will help you stay determined and driven - two qualities needed in early sobriety (which is hard bloody work).

The other benefit of staying focused on your truth is that it will lead you to be very clear in the language you use when talking about your decision. I was very straightforward when I told people I had quit. I didn’t make myself sound uncertain or confused. I was unequivocal in my messaging: “I’ve stopped drinking because I have a problem.” There’s not a lot of debate to be had after that. Often my family and friends would look surprised (“Really? Were you that bad?”) but I’d go to that place of truth inside myself and nod firmly or reiterate with a simple, “Yes I was that bad.” On occasion someone might push the issue: “You weren’t that bad were you? Can’t you just have one every now and then? Does it have to be forever?” and again I’d keep my replies short and firm. “Yes I was that bad. No I can’t just have one every now and again. Yes it does have to be forever.”

They didn’t know my truth. And they also probably didn’t know very much about addiction or recovery either. While I might have felt like I was rapidly becoming an expert on addiction and recovery, most of my friends and family had no knowledge of this world at all. All the more reason to not pay their reactions much heed. So I cut them some slack and didn’t let their queries get to me.

Forgive your loved ones for not getting it.

They’ll come around eventually when they see you go through an incredible, uplifting transformation. You may find you end up raising their awareness of addiction and recovery, or they may never fully understand - either outcome has to be fine. What matters is that you are working hard to become the best version of yourself that you can be. So forgive your friends and family if they don’t understand and maybe (hopefully) eventually they’ll start to get it.

I did have one friend tell me she missed drinking with me. And yes, it did hurt at the time. But I just told myself she didn’t understand what a huge and necessary deal this was for me. I had to laugh the comment off and hope our friendship would survive the change (it did and we still have great, fun times together).

I also had an old colleague hassle me at a party for being boring. “You used to be so fun!” he said while lounging drunkenly on a chair in a bar. I laughed and felt a bit uncomfortable but also knew he had absolutely no idea how much calmer I felt without a belly full of wine. I was sorry he thought me boring but to be honest I found drunk him a little boring too. (I also knew I’d be driving myself home later, would sleep fantastically and wake up with no guilt or hangover.)

I was fortunate not to have anyone wage a campaign of “Keep Mrs D Boozing”. I think that would be very difficult to contend with and I feel for anyone who has that mammoth hurdle to overcome. If someone is pushing you hard to keep drinking, then it might be time to question that relationship. Surround yourself with people who want to support you making this monumental change for the better. That leads me to my final recommendation.

Communicate regularly with people who understand what you are doing.

Find people who know what it’s like to get sober. You can do this by attending meetings in your community, joining online recovery communities like this one, or tapping into any one of the groups or social media pages available online. The people in these spaces are your new tribe and you need them. They won’t question your motives. They won’t try to convince you to keep drinking. They won’t hassle you for being boring. They know you’re a kick-arse sober warrior who is being brave and amazing by getting sober.

Because that is what all of us sober people are - awesome kick-arse warriors.