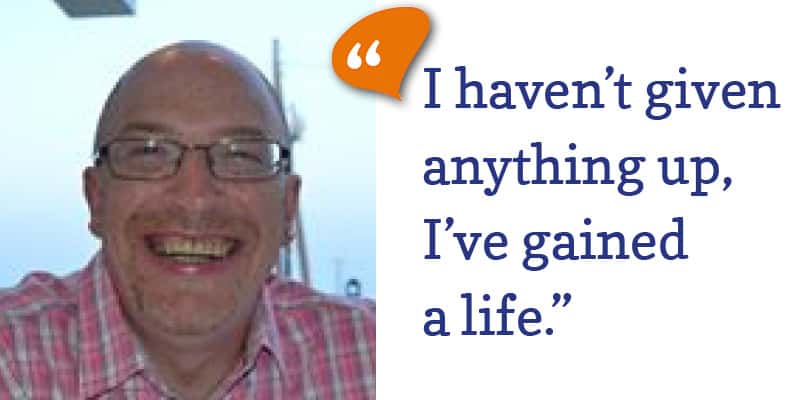 This week’s Sober Story comes from Jem, a 58-year-old based in the UK.

Jem: I was in an unhappy marriage – although I didn’t acknowledge that at the time; a job I hated and was horribly depressed – a combination of drinking and SAD.

Jem: I just remember sitting on the floor of my living room crying and saying “I don’t know what to do” over and over. I was used to being fairly decisive and in control so this came as a real shock.

Jem: To be honest, once I’d made the decision to quit, everything seemed fairly straightforward. I went to my doctor who sent me to an alcohol specialist and she supervised me through a gradual reduction followed by a Chlordiazepoxide detox at home. I remember very little about our meetings, except that in my first appointment she asked me what I wanted to do and I replied without hesitation that I wanted to stop drinking altogether, saying that out loud was very powerful. The other thing I remember is that we laughed a lot in our appointments!

Jem: Wholly supportive, my sister stopped in solidarity with me, although she didn’t actually tell me at the time this meant a lot to me later.

Jem: No, I’m lucky that I’m the sort of person who once I’ve made a decision, tend to stick with it. I was prescribed Acamprosate which may have helped with post-acute withdrawals, but I also experienced some of the immediate benefits of abstinence which strengthened my resolve.

Jem: After about six months, a switch seemed to click in my head and I literally woke up one morning and said to myself “I haven’t given anything up, I’ve gained a life”. That was when my personal growth really started, but dealing with all the emotions I’d been medicating for twenty-plus years took a little longer. That’s very much a process rather than a fixed point and one which is still very much ongoing. Physically, for a time I unwittingly replaced alcohol with sugar and gained quite a bit of weight. I then read Under the Influence: A Guide to the Myths and Realities of Alcoholism by James Robert Milam and Katherine Ketcham, which explained post-acute withdrawal syndrome and the importance of a wholefood diet. I’m still a little overweight but never gain or lose a pound and generally eat very healthily.

Jem: I was quite reclusive in the first six months or so, but when I did start venturing out it was really just a question of relearning old habits. I know that this is frowned on by some people, but nowadays I’ll often have an alcohol free lager or two when I’m out with friends. Most places now stock this and it means that very few people even notice that I’m not drinking. I’d certainly add a caveat before recommending this to anyone though, particularly in early sobriety – if it provokes any cravings, don’t do it!

Jem: Too many things to list! Mainly I learned that I wanted to work in the recovery field, and after about five years of sobriety and dabbling with forums etc I set about studying and volunteering to make this a reality. I was conscious that this might be a trigger, but after going through divorce and the death of my father in the space of two weeks, I felt that I was ready to take the next step.

Jem: In every way possible. I’m now a trained person-centred counsellor, in full-time employment as an alcohol worker helping dependent drinkers in the community. I absolutely love my job and it’s great to receive real professional recognition for my work.

Jem: See above! I now have a passion for my work and a real zest for life. I returned to active worship after about two years of sobriety and this very much keeps me grounded. I realise that church life doesn’t appeal to everyone, but when we are in active addiction we are essentially selfish and my faith helps me to address and correct this.

Jem: I don’t think so. I’ve been very lucky in that I’ve been surrounded by supportive people and seem to have largely made the right choices for my recovery. Sometimes it’s just been a matter of deciding on the next positive step and taking it.

Jem: Stick with it, life does get easier AND better. Don’t think about how you’re doing today or this week, in a year’s time you won’t believe how far you’ve come.

Jem: Just do it! Make the decision to change and then make your recovery the most important thing in your life, it’s the one thing it’s OK to be selfish about.