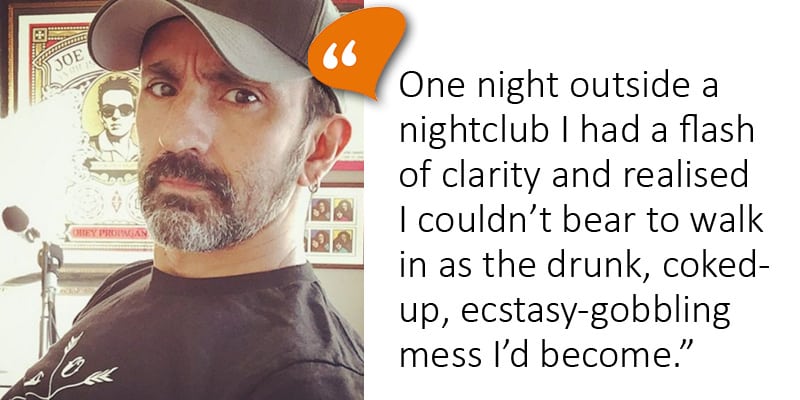 Chris: I’ve been in abstinent recovery from alcohol and other drugs for over 21 years. I’ve not participated in any program—12 Step or otherwise.

Chris: It became increasingly evident during my last years drinking that the “fun, party guy” façade would not serve me well in adulthood. And in the final months, once I’d begun to strip the other drugs away, I finally gained the clarity to see the true underlying fuel for all my problem—the alcohol.

Chris: There were two distinct moments that propelled me into my sobriety: One night sitting in my car outside a nightclub I had a flash of clarity and realised I couldn’t bear to walk in as the drunk, coked up, ecstasy-gobbling mess I’d become. Shortly after that realisation I came across Caroline Knapp’s terrific memoir, Drinking: A Love Story. Which, though skeptical at first, I quickly came to realise was completely and totally about me.

Chris: I was fortunate in that I was able to spend the early days in relative seclusion at my family’s home. I’d devised my own “detox/rehab” plan and I almost immediately realized that my “Gatorade and iced tea” replacement plan wasn’t going to get me through the early days. So, I added non-alcoholic beer at about at the beginning of the second week. Other than that, there was some neuro-chemical rebalancing going on that was a bit disconcerting; I remember not being able to force myself to talk for about a day or two early on.

Chris: My step-father and mother are in the wine business. At the time my father was in the beer business. Somehow this lead to a certain level of acceptance for alcohol-fueled aberrant behavior. They weren’t dismissive but they certainly didn’t know what I was talking about and at the time I didn’t have the understanding to allow me to explain it to them. I had a least one sibling get angry at me and I think one tried to pretend it wasn’t happening to help protect their nascent alcohol issues.

Chris: No. Though about 4 months after I got sober I accidentally took a bite of a rum-soaked pear which I proceeded to spit out like I’d been poisoned. Which I suppose I had.

Chris: In a surprising case of serendipitous timing, I had an pancreatitis scare the very first day and through my first week sober. About a week after that I started working out (perhaps a bit too obsessively) every day and got into the best shape of my life within the first 5 months. The emotional rollercoaster settled within about 3 months and truly smoothed into an amazing sense of contentment like I’d never know, before or since, at about 10.

Chris: As a socially anxious introvert it can still present challenges to this day. For me it really depends on how good I feel about my exit plan should I need it.

Chris: That I could excel not only at “a” thing, but many things.

Chris: I was able to know myself and like myself. Which in turn allowed me to let others know me. I have a wonderful wife and an amazing child. They were unimaginable to me before.

Chris: The ability to understand how to help myself be healthy and happy (or at least content). Without the understanding I’d just be flailing aimlessly.

Chris: I’d learn more and share more earlier with my family. To this day they don’t really understand addiction, alcoholism or recovery.

Chris: Find what works for you and keep doing it but don’t close out the rest. Also, there is not an ounce of shame in simply wanting recovery much less working for it.

Chris: Once I got here it became clear that one has nothing at all to lose in sobriety and absolutely everything to gain.