Home For everyone who is “not really that bad” (Guest Post)

For everyone who is “not really that bad” (Guest Post)

This guest post was written by member @sunshinestace. She actually wrote it as an update in the Members Feed, but I thought it so well articulated and powerful it was worth featuring here. Enjoy reading her warts-and-all account of her drinking problem.

Today marks 2 weeks of not drinking. It has been about a year since I really looked at my drinking and realized it was not healthy, and was acutally a problem, and I want to share a bit about what the process has been like, so that maybe it can help others in a similar position.

For me, never having any serious consequences (no DUI’s, no broken relationships, no getting fired from a job) due to my drinking kept me from acknowledging that it really was a problem, for a long time. People would see me as a high-achieving, educated, always happy mom and professional who “has it all together”, and is living a great life. But on the inside, I was anxious, depressed, and lacked coping skills to deal with my emotions and life’s stresses, and that’s how I ended up using wine (mostly) to numb my feelings. It is such a socially acceptable way to “relax” at the end of a day, and it was easy, and for a while it seemed to work.

But then, over time, I noticed that when I felt upset or worried about something, my immediate thought was “I need a drink!” and after a long day of work I would actually perk up at the thought “I can go home and open a bottle of wine!”. My husband travels a lot for work, and I noticed that I felt happy when he was gone, because it allowed me to drink the way I wanted to ... 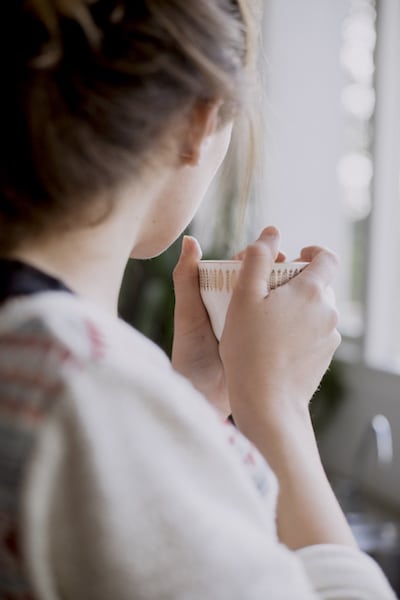 (pour glass after glass, as soon as the kids were in bed) without him giving me judgey looks.

Then there were the times that maybe the kids had a snow day from school, and it was 3pm, and I was bored out of my mind and I thought having some wine would make the day more fun. I usually didn’t “get drunk” in front of the kids, but let’s be honest… even having a slight buzz meant that you are not really yourself and you are not fully present.

Then I started drinking before the kids went to bed, during our bedtime routine. I would pour a huge glass of wine and bring it with me when I read bedtime stories. Instead of laying down to cuddle the kids, I would sit up (so I could take sips from my glass, perched on the nightstand). Sometimes I quit reading early because I noticed I was slurring.

I switched from wine glasses with stems to the stemless type, “so the kids won’t knock it over” when it was my lack of coordination after several servings of wine that would send a glass breaking. I started resenting it when my kids picked a long bedtime story, because I wanted them to get to sleep ASAP so I could be alone and “really relax”… which meant drink lots of wine. I began shifting the wine bottles around in the recycling bin, hiding some, because in the morning I felt ashamed seeing how many I had gone though that week. And I was worried my husband would see.

I began to classify social events in my head as “it will be fun, because there will be drinking” and “it will be boring, because alcohol won’t be served”. When we ate dinner at a restaurant that didn’t serve wine, I felt resentful, like I was being cheated out of what was my happy thing. That’s what alcohol became… my Happy Thing. My One Happy Thing.

I began to wake up at 3am, feeling anxious and sweaty after a night of drinking wine, and I would swallow the 2 advil I had set next to my bed, and drink a glass of water, and think to myself, this is ridiculous, you really need to stop drinking so much. Many mornings I stood in the shower and closed my eyes and my balance felt off and I could still taste the wine, stale in my mouth. My head felt foggy as I drove the kids to school. I would need to stop at the drive thru and order a greasy breakfast sandwich to try to “soak up the alcohol” and feel better. My skin looked bad and I gained a lot of weight. I never worked out anymore because who wants to get up at 5am and exercise when you are hungover. Sure… nothing “bad” happened to me with all this drinking. But certianly nothing GOOD was happening either.

So about a year ago, after yet another night of drinking more than I wanted to, and feeling like crap in the morning, I started googling “how to stop drinking” and “am I an alcoholic”. That started my journey towards sobriety. I read blogs about stopping drinking, I ready sober memoirs, I listened to podcasts, I found an app that counts days, and I found this site and this community of sober friends. I would like to say that’s IT – I saw the light and I’ve been sober ever since! But that’s not how it worked for me. The process has been non-linear, and humbling. I have had over 100 days of not drinking, and I have also had a couple of nights that I binged and blacked out. I have bared my soul and my secrets to online groups like this, but I have not talked to anyone “in real life” about this issue. I see that alcohol is the enemy, a trickster that lies and controls and takes away joy and life, but sometimes I still minimize my relationship with it, and lie to myself and say “I can moderate, I was never really THAT bad”.

So I guess that is what this post is about. For everyone who “is not really that bad”… and everyone who is considering moderation… this is for me, and for all of you. Looking at my story, laid out as it is, its obvious that alcohol is a problem for me. I am one of the lucky ones who has not had a horrible life consequence (yet) due to my drinking. This is a gift, and instead of using that as an excuse NOT to quit it entirely, I should grab on and stay sober because I know its the right thing for me. I am still a work in progress… and I have a ways to go, I know, but I encourage anyone who is thinking “am I really that bad” to instead ask yourself “is my life really that good?” … does alcohol add good things to my life? Does it make me happier, smarter, more productive, and more healthy? And if the answer is no – it doesn’t add good things to life, then its probably time to let it go and stop.

That’s what I have found to be true for me.