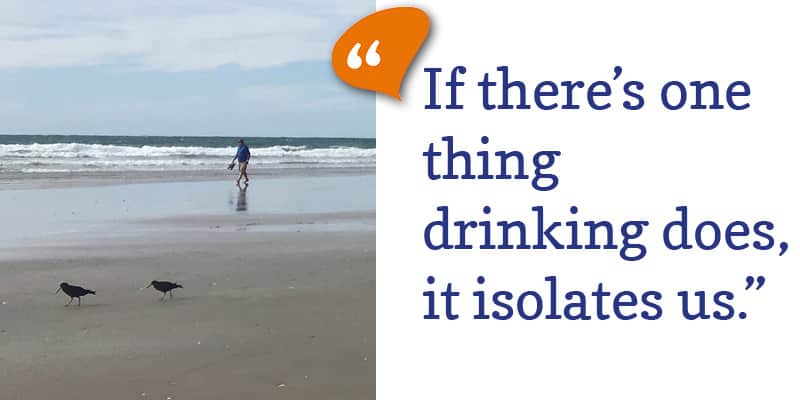 This guest post comes from member @liberty who wrote it as an update in the Members Feed. It had such a great response from the community I thought it was worth featuring here! Enjoy her wise words.

@liberty: I first logged on here after seeing Mrs D and someone I knew of, talking on TV about being alcohol free, and this site. I can hardly remember what I expected to find here, I just felt an uneasy mixture of tense and hopeful and despairing and not hopeful. I so wanted to hope, but I didn’t know…

I wasn’t even really sure I wanted to completely stop drinking. I was afraid to hope it was possible. I just wanted my feeling of being controlled by my need for alcohol to change. So tired of it.
I do though vividly remember reading one post after another and thinking – oh! – they have that feeling too.

Oh! I’m not the only one who comes home and drinks alone.

Oh, others know that crushing feeling of shame and self-loathing.

Oh, others do that quick scan on waking to check the damage, followed by a wave of shame, self-disgust and sadness.

And on and on it went. It seemed almost every sensation I’d had, someone else here had also had. That was a revelation because, as I came to learn, if there’s one thing drinking does, it isolates us. The isolation and compulsion makes us think we’re worse than everyone else and more of a failure. That in turn feeds the drinking. Hey presto. Self-perpetuating problem.

There were others like me here. It both comforted and reassured me that I was in the right place, and also showed me what my drinking really was. Because I was here and reading others’ posts, it was harder to hide the reality of that from myself. That too, showed me I really needed to just stop. Do it differently.

I didn’t post anything at all for a while and I still don’t have much to say about myself. But I see myself in so many posts on a daily basis, all kinds of struggles and approaches and small joys. Then, every now and again, someone has a lapse or a slip, and I’m grateful and humbled that person shares that on here, as it reminds me what that hellish cycle was like. I came to understand that I needed these reminders. It’s easy to get complacent, easy to forget those awful mornings, that crippling feeling of shame, of being trapped, of life being a small repeat treadmill, of feeling physically awful most of the time. Of not quite knowing who I was or what life might be like without being numb to it a lot of the time. Not trusting myself. The sadness of not being sure I could stand myself daily without some sort of buffer.

I’m old enough to know that what might seem a small goal is huge. I would not exchange being able to trust myself, for anything. But what I could do pretty easily is forget what it took to trust myself and what it takes to keep doing that. I think it would be really easy to forget, and just pick up a drink. Being here at Living Sober at every stage has been the cornerstone of me making this ongoing change in my life.

I’m inspired now by newer members who can’t imagine getting to big numbers. But it’s just time. Like with any change, we can’t imagine at first; we do it, we press repeat, then eventually we’ve been doing it a while. I hope this post might help you see that we are all similar as well as different, and that’s no magic about it. There’s timing though.

This site has really confirmed my belief that connection plays a major part in changing any habit like this. For me, I need to just keep connected somehow; however it is. Just a toe in, is better than not in at all. So please don’t be ashamed to need to be here. It’s a beautiful thing.